I am so excited to share today's Raw Vegan Taco Salad! I've been obsessed with creating raw vegan salads recently, and this loaded salad has been one of my go-to recipes. It's nutrient dense, easy to make, and delicious of course!

What Is A Raw Vegan?

If you're new to eating plant based, you may not be familiar with raw veganism. Raw vegan refers to a lifestyle that revolves around eating all raw fruits, vegetables, seeds, and nuts. Eating raw vegan also means avoiding cooked and processed foods.

Do I think eating a raw vegan diet is the optimal diet? It could be! There is still so much research to be done to determine the advantages of consuming a fully raw diet. Personally I think that a raw vegan diet is a bit too restrictive for me. However I do believe that there are numerous health benefits to eating raw vegan foods.

First and foremost, eating raw vegan foods means replacing unhealthy processed foods with nutrient dense plant based ingredients. Therefore you are not only cutting out the junk food, but you are replacing it with super nutritious foods.

Second, raw vegan food is typically lower in calories and higher in volume. This is great if you are trying to lose weight, or are a volume eater (like me). In a society where almost everyone is eating a surplus of calories, eating a few raw vegan meals throughout the week can be very beneficial!

How To Make Raw Vegan "Meat":

One of the key elements to this Raw Vegan Taco Salad is the raw vegan "meat". This "meat" is made from mushrooms, carrots, walnuts, and spices. It's the perfect filling and nutritious raw vegan meat alternative.

You may be wondering if this raw vegan "meat" tastes anything like real meat. I am not going to try to make an argument that it taste like real meat, because it doesn't. However it does resemble meat, and it is full of spicy Mexican flavors.

This resembles meat, because the combination of the mushrooms and the walnuts. The mushrooms give it a meaty texture, and the walnuts help hold it together and make it more filling. The key to making this raw vegan "meat" taste right is using the proper spices. You can play around with the spices to your taste, but I always recommend including: paprika, garlic powder, onion powder, and some type of herb (I like oregano).

In order to properly prepare the "meat", you will need a food processor, or blender. A food processor works best, but you can totally get away with using a blender if you don't have one. It will just take a little more time and effort.

It is also important to chop with ingredients into small pieces before adding to the food processor/blender. This helps the ingredients to be more smooth and obtain a meaty texture. It also helps to prevent any large chunks in the "meat".

Once the ingredients are chopped and prepped, add them to your food processor and process until it resembles ground meat.

For The Raw Vegan Salad:

For The Raw Vegan "Meat":

How To Make This Raw Vegan Taco Salad:

One of the best part of most raw vegan recipes is how easy they are. Since they are made up of raw fruits and vegetables, there's no cooking required. All you have to do is chop up the ingredients and you're good to go! This Raw Vegan Taco Salad only takes about 10 minutes to prepare, and it's ready to be served!

I like to start with the raw vegan "meat" when I make this recipe, so that the herbs and spices can marinade it. To make it, follow the steps in the above "how to make raw vegan 'meat'" section.

To make the taco salad, begin by roughly chopping the romaine lettuce and adding to a large bowl. Since this is a raw vegan salad, it will be huge, so make sure you're using a very large bowl. Next, rice the cauliflower. If using frozen pre-riced cauliflower make sure to let it defrost before adding it to the bowl.

Slice the peppers and tomatoes, and dice the onion, avocado, and jalapeño. Add to the bowl with some chopped cilantro.

In a small bowl combine the creamy cilantro lime dressing ingredients together and mix until smooth. Scoop the "meat" onto the salad and cover with the dressing. Toss and enjoy immediately!

Where Do Raw Vegans Get Protein?

If you're vegan, then you are very familiar with the "where do you get your protein?" question. Luckily as eating a plant based diet has gained popularity, this question is becoming less popular. However raw vegan diets are still quite uncommon. Since raw vegans can't eat beans, and grains, many people wonder where raw vegans get their protein from. A totally fair question to ask in my opinion.

Eating raw vegan and getting enough protein can be tricky. Most vegetables and fruits are not super high in protein (they still contain some, so don't count them out!). Therefore it is important to incorporate seeds and nuts in order to get adequate protein. That's why it is super important to add walnuts to the vegan "meat" for protein and healthy fats.

Technically, oil is raw vegan if it is cold pressed. However I personally still don't like the idea of using oil when you can eat the food in it's whole foods form. When you choose whole foods over oils, you are consuming more nutrients and fiber. This will help keep you full for longer, and improve digestion.

Why Am I Not Losing Weight On A Raw Vegan Diet?

If you are struggling to lose weight while eating a raw vegan diet, take a closer look at the foods you're consuming. If you're eating a lot of calorically dense foods like dates, nuts, and seeds throughout the day, consider replacing these with hydrating fruits and vegetables. You will see weight loss results in no time. 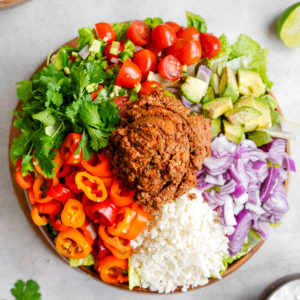 For The Raw Vegan Taco Salad

For The Raw Vegan "Meat":

For The Creamy Cilantro Lime Dressing:

For The Raw Vegan Taco Salad:

For The Raw Vegan Meat:

For The Creamy Cilantro Lime Dressing: 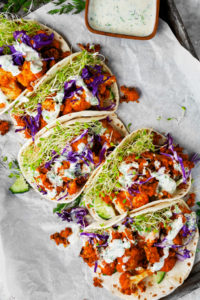 These buffalo cauliflower tofu tacos are the ultimate healthy and delicious combo! This recipe is perfect for serving vegans and non vegans, because everyone is sure to love it! You can even make it in an Air-fryer! This buffalo cauliflower taco recipe is: vegan, oil-free, gluten-free, refined sugar-free, and whole foods plant based! 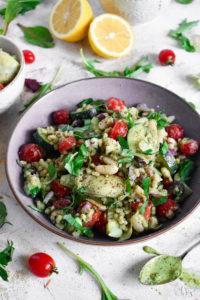 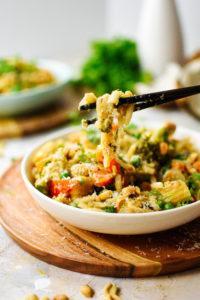 This hearty vegan Coconut Peanut Noodle recipe is loaded with color and flavor. This vegan udon noodle recipe is the perfect healthy dinner to make as the colder months approach us. This recipe is easy to make, only uses one pot, and is perfect for meal prepping. This recipe is vegan, dairy-free, oil-free, high protein, high fiber, and can easily be made 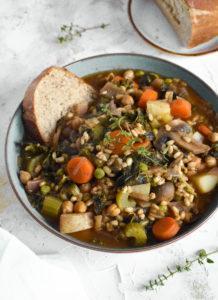 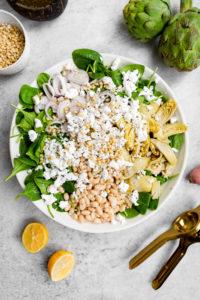 This Spinach Artichoke Salad is the perfect healthy vegan salad. It's made with simple ingredients, only takes 5 minutes to make, and it's delicious! This salad recipe is: vegan, plant based, gluten-free, and refined sugar-free.