Today’s Vegan Spinach Artichoke Pasta recipe is very special to me. I was inspired to create this pasta recipe after developing my Plant Based Spinach Artichoke Dip, and seeing it gain so much popularity! I am a little bias, but I think it’s the best healthy spinach artichoke recipe out there. This creamy vegan pasta is made with simple clean ingredients and is perfect for an easy and healthy weeknight dinner. It’s full of fiber, low-fat, and packed full of nutritious vegetables!

What Is Vegan Spinach Artichoke Pasta:

Spinach and Artichoke seems to be a match made in heaven. There’s everything from quiches, dips, soups, and obviously recipes like this Vegan Spinach Artichoke Pasta. A traditional spinach and artichoke recipe is typically made up of three pillars: spinach, artichoke, and cream.

Obviously since all my recipes are vegan, one of these pillars had to be adjusted. Thankfully you can still achieve the same creamy texture found in spinach artichoke recipes without the dairy. This will leave you with a lower fat, and more nutritious spinach and artichoke recipe.

You can do this a couple ways. The easiest way would be to use vegan cheeses and oils. I usually like to stay away from these, because ultimately they’re not that much healthier than the traditional stuff.

The second way is to use real whole foods plant based ingredients. This is what I like to do, because it’s super nutritious and low fat and low calories. It’s also way more filling.

Making this Vegan Spinach Artichoke Pasta is surprisingly easy. All you need is a large pot and a blender.

Begin by roughly chopping the potatoes and boiling them until soft. While the potatoes are cooking, prepare the remaining ingredients. Get the spinach out to defrost. Mince and chop the garlic and shallots. Strain and rinse the artichoke hearts. If you have another pot, begin cooking pasta according to instructions.

Once the potatoes are done, strain and add to the blender along with vegetable broth, miso paste, nutritional yeast, raw cashew butter, and salt. Blend until silky smooth. Sauté the shallots and garlic in a touch of vegetable broth. Add the artichoke hearts and spinach. Pour the sauce over and mix.

Add the cooked pasta and allow to cook on low for about 5 minutes to allow the sauce to thicken up. Serve and enjoy!

Is This Spinach And Artichoke Pasta Healthy?

Although spinach artichoke dip is named after two vegetables it is typically very unhealthy. It’s full saturated fat, dairy, and processed ingredients. However just like my Plant Based Spinach Artichoke Dip, this Vegan Spinach Artichoke Pasta is low fat, full of vegetables and fiber, and of course vegan!

Spinach and artichokes are both great sources of plant based protein and fiber, as well as: vitamin C, K, B6, B9, E, folate, and magnesium, phosphorus, potassium, and iron. These nutrients combined with the dairy-free sauce and gluten-free pasta make this recipe highly nutritious.

Although 90% of my recipes are gluten-free, I do not believe that you have to eat a gluten-free diet to be healthy. To be completely honest i think that a lot of gluten-free products out there are actually quite unhealthy. Don’t get me wrong, there are plenty of healthy ones, but just because it’s labeled gluten-free, does not mean it’s healthy. Therefore it’s important to be picky with your gluten-free items.

If you do not follow a gluten-free diet, I recommend using whole wheat. Most of the time whole wheat is better than gluten-free, because it has more fiber and protein. It is also usually more affordable as well. If you’re looking for a lower calorie pasta option, I would recommend using kelp noodles, spiraled zucchini, or spaghetti squash.

Is This Vegan Spinach Artichoke Pasta Good For Meal Prep?

If you’re looking for an easy, healthy, and filling vegan meal prep, this Vegan Spinach Artichoke Pasta is for you. I love meal prepping creamy pasta recipes, because they keep so well in the fridge. Since this recipe uses canned (or jarred) artichoke hearts and frozen spinach, you don’t have to worry about any of the ingredients going bad, or getting soggy.

The only recommendation I have for meal prepping this recipe is to use air-tight containers. This will ensure that the pasta doesn’t dry out at all and all the moisture will be retained. 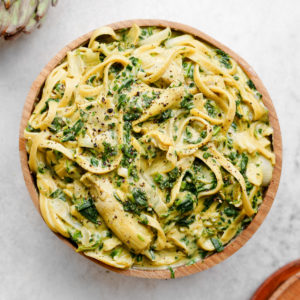 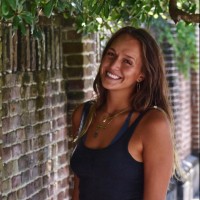 Hi, I'm Katie and I am so happy you're here! I developed and photographed every recipe on this blog just for you! My mission is to create an abundance of healthy plant based vegan recipes so that you never have to worry about your food again!